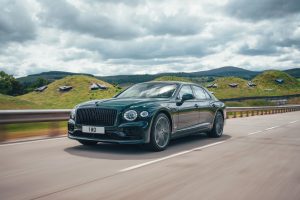 Bentley is the flagship, the face and the muscle of British luxury cars, and it began its operations in January 1919, by the hand of Walter Owen Bentley. The manufacture of their cars began as such in 1920, always focused on luxury and elegance, but fulfilling the dream of the Bentley brothers, of manufacturing luxury cars with forged aluminum pistons.

In the first edition of LeMans, in 1923 Bentley was fourth with its 3.0-liter engine, in the hands of Frank Clement and John Duff, but later in 1924 they would achieve the triumph. Nowadays Bentley has limited its participation in competitions a little, remaining only with a small participation in the Blancpain GT, with its version of Continental, the Continental GT3 developed and tuned by M-Sport, in addition to participating in the 24 hours of the Nürburgring .

Bentley has always been focused on luxury and comfort, but also performance, since one of its first models, the 3-liter Bentley, mounted its newly developed 4-cylinder engine, with 4 valves in each of them with the purpose of increasing performance compared to other models of the time. So much was the success of the Bentleys in their time, that James Bond drove one in “From Russia With Love”, where he migrated to Aston Martin, three of his Blower 4.5 models.

The Bentley Mulsanne, launched in the eighties, was the first model to break that tradition of an elegant and luxurious car, transforming it a little more to that sports trend that to some extent reminded North American models and that today the brand continues to broadcast.

When Bentley passed into the hands of the Volkswagen group, the company was injected with a number of resources that enhanced its design aspects, both in unlimited luxury, as well as in the characteristics of all the brands belonging to the German house. Today Bentley unleashes its full potential, with design elements that make these cars a true expression of ultimate luxury, interiors that make the occupants feel like they are floating, soundproofed cabins, bucket seats, and whatever the owner can imagine. .

Bentley’s most direct competitor is undoubtedly Rolls Royce, but it also shares a segment with Mercedes’ higher luxury variants with the Maybach S-Class, Audi A8 and BMW 7 Series. Bentley is a must-drive vehicle. person who wants to feel the maximum luxury that a car can offer, but who also, if you step on the accelerator, will know how to respond with a lot of verve, courtesy of the engines that the company mounts today in its top-of-the-range models, a generous 6.0 12-cylinder liters.

With a sleek yet sporty design, desired seat configuration, and engines that will blow the mind of anyone with a passion for performance, Bentley is at the top of any car enthusiast’s list.

Requirements to rent a Bentley